So why are we so heavily dependant on foreign oil resources? We have enough in this country to be totally independent of foreign sources. We also have all of the metals in this country we would ever need, but most have become inaccessible due to government programs. So who does our government work for anyway?  US citizens, or special interests to the obama administration and to congress?

In the Williston Basin of North Dakota, the USGS estimated recoverable oil resources with 2007 technology and prices at 3 to 4.3 billion barrels from the Bakken Formation. However, when Obama was elected, gas prices were $1.61/gallon on average; today, they are set at nearly $4/gallon, which would provide a substantial increase in the resource estimate in this field.

It is interesting to note that there are sources that indicate using today's technology, that as much as 24 billion barrels of oil may be recoverable. But, when we look at other USGS estimates (prior to when the agency became so environmentally oriented during the Clinton administration) what is really notable was a group of USGS research papers. One of these by the USGS (1999), Leigh Price estimated the Bakken Shale contained a resource from 271 billion to 503 billion barrels of oil!

In the Colorado-Utah,-Wyoming region, there are giant oil shale resources in the '3-corners' region that are found in the Green River Basin, Washakie Basin, Uintah Basin and Pieance Basin. These may be the richest oil shale deposits in the world. Many projections indicate that 600 to 800 billion barrels of oil can be recovered from this area. In 2009, the USGS reassessed the oil share reserves raising their estimate by one trillion barrels! In other words, there is likely 1.525 trillion barrels of oil in this region not being developed.

The Mid-Continent Oil Province also contains sizable resources. For example, a part of this province in Texas was estimated to host 190 billion barrels of oil. This province extends into Arkansas, Louisiana, Kansas, New Mexico, Oklahoma and Texas.

The Outer Continental shelf of the US is estimated to host about 66 to 115 billion barrels of oil.

In Canada, oil sands and tar sands in the Athabasca Basin contain as much as 1.75 trillion barrels. World Oil Shale reserves are impressive. And as any good prospector knows, that once a field is explored and developed, the resource estimates also rise as new deposits are found.
Posted by PlanetNews at 9:21 AM No comments: 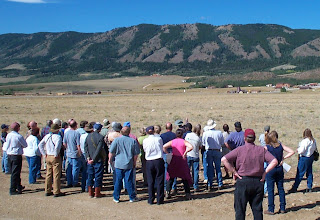 It is unfortunate, but the Obama Administration continues to show a lack of understanding of scientific principals (or lack of ethics), whether it be related to global warming, space exploration, or oil resources and drilling. To place a moratorium on drilling in the Gulf Coast will lead to economic disaster in the region, lost of hundreds (if not thousands) of jobs, and gasoline price hikes that will surpass $5/gallon by 2012. The reason for this is simple. In the exploration business, one cannot stop drilling unless they plan to abandon a well because the hole will collapse and will need to be drilled again. Oil companies lease drill rigs from drilling companies. If there is a moratorium, all drill rigs will move elsewhere resulting in jobs lost in every sector of the oil and drilling business in the Gulf Coast at at time when unemployment is already >10%.

A few years ago, this happened to a company I wrote about that was looking for diamonds in Botswanna and also Colorado. Prior to the economic collaspe in 2008-09, a geologist from Wyoming discovered what could be one of the largest diamond provinces in the world in Colorado, Montana and Wyoming. Some probable diamond deposits were found for an Australian diamond company which planned to drill the anomalies. The company had to obtain duplicate permits from three different government agencies and was delayed in drilling a shallow 150-foot hole by a few months costing the company more than 10 times what it should have cost. At the time, there was a major economic boom in metals and diamonds: essentially every small exploration drill rig was already leased. The company finally found one rig after searching all over the country for weeks and could not find any others.


The bureaucrats were out of hand in Colorado and Wyoming. And if the Obama Adminstration really wanted to do something positive, it would dramatically cut taxes and eliminate most of the budgets for bureaucrats - why is it that we need four different agencies to do the same exact job? In another case, a mining permit was delayed in Wyoming for 11 years. This was for a very small gold mine at South Pass that already existed since it was dug in the late 19th century. And it involved only 3 people. Is our government going crazy? The answer is YES.


If the Obama Administration stops drilling in the Gulf Coast (and as I understand, it was the Clinton Administration that initiated deep water drilling), then the most logical move would be to open up oil and gas resources elsewhere in the country. It is unfortunate, but the Obama Administration has misled the public again. The Administration stated that the US has only 2% of the world’s oil reserves when in fact, the US has more than 2 trillion barrels of oil resources sitting in the ground in areas that are mostly withdrawn from exploration and development - not so much to protect the environment - just simply because the government demands to be in charge!


These resources lie within the Piceance Basin in Colorado, the North Slope of Alaska, and the Bakken Formation in North Dakota. Try to imagine 2 trillion barrels! It’s there and we could easily energy self-sufficient for the next 2 centuries or more! As a comparison, Saudi Arabia’s oil reserves are estimated at 267 billion barrels.
Posted by PlanetNews at 1:33 PM No comments: